If you stick me in an airport for several hours and give me access to a Club Lounge with a “bar” (it's kind of insulting to even dignify it with that name!)  that has yet to get its liquor license so it can only serve soda and water, and a rain storm pouring outside *so* hard that I briefly wonder if God is upset with me and wants to punish me by forcing me to stay behind in Boston for another day at some airport Hampton Inn, if you do these things, then you must know that I will turn to Sky Mall for solace.

There were just too many great things left out of the first post (here's a link to Sky Mall Part 1: The Awesomeness Within.) so I felt that a follow-up highlighting further gifts that Sky Mall has blessed us with was in order. So, without further ado, I give you….Sky Mall Part 2: The Mall Strikes Back! 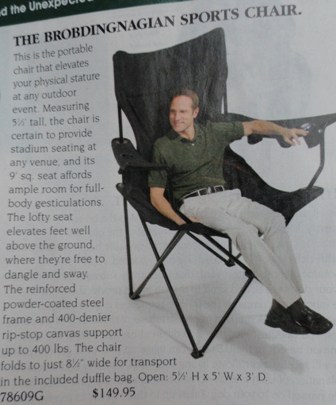 The Big Ass Chair – sitting 5 ½ feet tall! – is perfect if you are looking to alienate everyone that is sitting behind you. The results of said alienation will start off with screamed obscenities first just vaguely shouted and then pointedly directed your way, will quickly escalate to having food and beer bottles chucked at the back of your head and then ultimately end up in a fight because your Big Ass Chair is blocking the view of every other patron. Sure, you can take the high ground of, “My good sir, I’ll have you know I bought this at Sky Mall!” but let’s see how good that works when the mob mentality of “I can’t see ‘cause that jack knife has a huge ass chair! Get him!!!” takes over. Also, that my feet are “free to dangle and sway” is really the nail in the coffin for this thing. My feet “dangling and swaying” is very uncomfortable, and ultimately makes them go to sleep which is going to make it a lot more difficult to elude the riled mob. 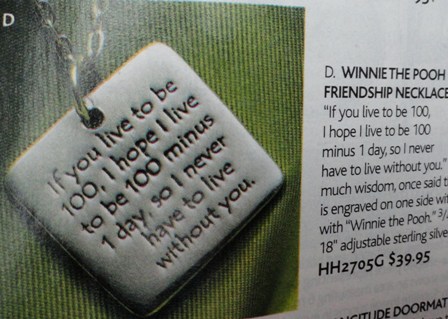 First off, how in the HELL is this a “Winnie the Pooh Friendship Necklace”? I can't see pooh saying this ever. I mean this is a pretty lucid thought, and far beyond the "Where is my honey pot, Christoper Robin?" he is normally capable of producing. However, this entire thing could be much shorter by just getting straight to the point. “I hope I die first.” The flipside could say “PS: I only have life insurance on you.” 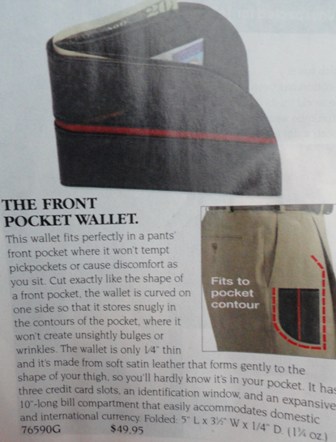 For Molly, who for some reason is strangely fascinated by the awkward, forced celibacy which is owning and using the Front Pocket Wallet. And why not? With this wallet in place, the only “unsightly bulges” in your pants will be reserved for those awkward moments intended by nature. Or perhaps when I find myself sandwiched between two iPad users. Also, this either discourages pick-pockets or raises the bar for them to *really* go deep and feel around for a bit. 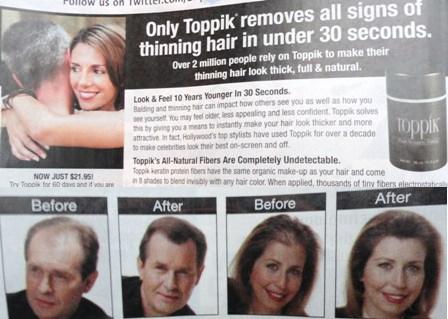 Many things come in a can. Whipped Cream. Cheese. Ham. However, hair should *never* come in a can. Also, as a general rule, you should probably not go hair shopping in an airplane magazine. And if you think that magic hair is actually going to work priced at $21.95, well then, you deserve to buy it and endure all the ridicule that spray painted hair will bring you. Also, you will NEVER look like the “After” picture. At best, you’ll look like “Before” with clumps of black or brown spray paint atop your head. Also, I hate to ruin it for you, but those people aren’t laughing WITH you... 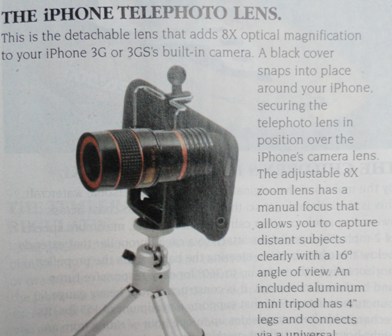 Look, I’m obsessed with the iPhone too. I don't care if the Evo can grant me three wishes including giving me an iPhone 4 or that it transforms itself into a frickin' jet and flies me to my own private island. It still hasn't been blessed by His Steveness. There are just SO many things that iPhone does that Lady Phone can only dream of. But if you are actually thinking of buying a tripod AND telephoto lens kit for your iPhone, just do yourself a big, giant favor and buy an actual frickin’ camera! Seriously. My new Sony cam has a 10X optical lens and shoots 14.1 megapixels and 720p video and cost just over $200. Let the iPhone do ALL the other great things it does AND feel free to use it to take pictures of random drunk people or the other spur-of-the-moment pix. But for REAL pictures use a REAL camera. 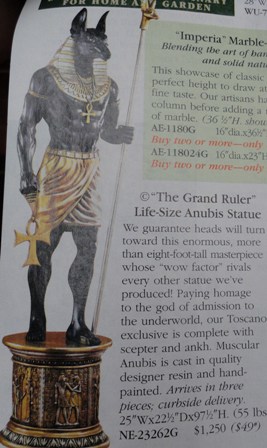 I know that some of you saw this and immediately thought, "Wow! Life-sized Anubis statue! I'm there!" And if you happen to be the reincarnated mummy of Pharaoh Ramses, then by all means purchase a Life-Sized Anubis. If you starred in an Indiana Jones film and George and Stephen sent you one signed as a gift, then by all means, enjoy your Anubis. And if you find yourself invited to a month long orgy of unimaginable delights at the palace of the King of Egypt and you somehow won this in a drinking contest that you can’t even remember participating in, then, yes, enjoy your Anubis! For everyone else, NO!!!! An 8-foot tall Anubis is never the answer. Never.

Again, no! OK. Wait. Are you making an 8-figure major-Hollywood production and you can’t find a good prop shop in town to create some set dressing? Oh, you’re not? OK, then no. 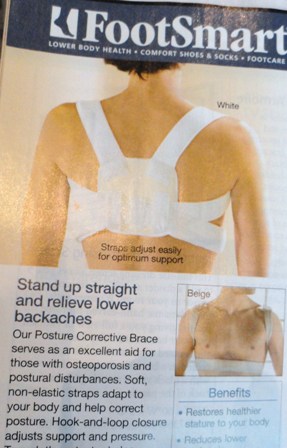 “I said it’s for lower back pain! My back is hurting!”

“Look. It helps with postural disturbances.”

“Dude…it has a hook-and-loop closure. It’s a frickin’ bra, dude!”

“Dude…can I touch your boobs?” 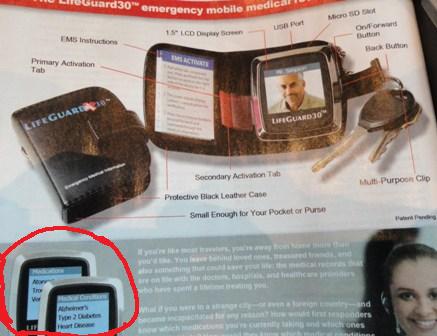 Medical alerts are important. Those life alert bracelet thingies. That “I’ve fallen and I can’t get up!” thingy. But if you are in SUCH bad health that you need this amount of technology to inform people of your many medical conditions, what the hell are you doing traveling? Stay home! Near your doctor who is clearly on 24-hour life-alert speed dial.  In case you can’t read the part I circled, this traveler is suffering from Alzheimer’s, Type 2 Diabetes and Heart Disease. Basically this person is a forgetful, walking medical time bomb ready to explode on someone else’s watch. I’m guessing that his HMO bought him the one-way plane ticket and dropped him off at the airport and said, “OK, grampy. Time for you to take a trip!” 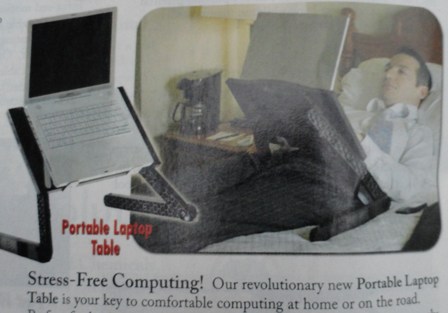 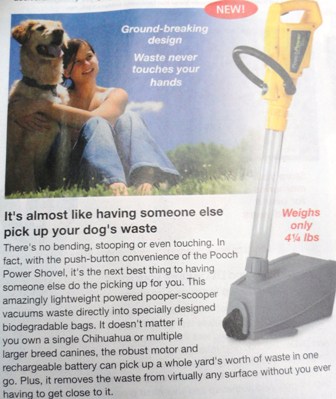 I must admit, seeing people walking around my neighborhood carrying bags filled with oversized dog feces is pretty disgusting. (Also, how about doing us all the courtesy of using a bag that isn’t CLEAR!!! I don’t really want to have my eyes naturally drawn to the thing in your hand – probably an instinctual response from the days of old when I needed to check to see if you were holding a weapon, full of pox or whatever – and see this gross, bulging pile of dog crap.) However, as disgusting as carrying the poop-bag around is, I just can’t imagine anyone actually trading that in for a 4.25 pound poop sucking machine. Also, you want to know what’s exactly like almost having someone else picking up your dog’s waste? Having someone else actually picking up your dog’s waste. Also, you know that at some point you are going to have to empty this thing and who even wants to imagine what sort of nightmare that’s going to be... 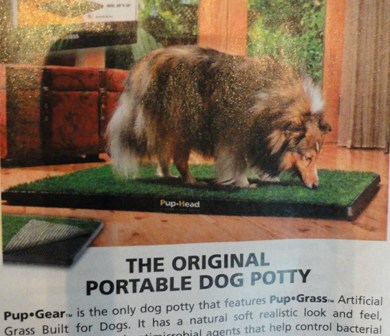 Clearly dog waste is of critical concern to Sky Mall readers. Again, let me share with you the ultimate portable dog potty. It’s called “outside.” Do you really want to create a comfortable, cozy place in your house where your dog goes to lay a giant pile? Oh, God... You do, don’t you? 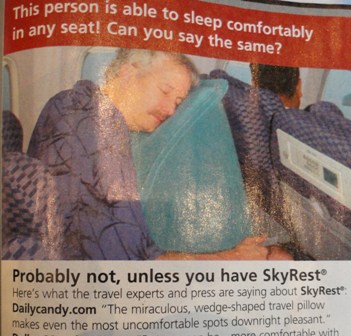 If you could actually sleep comfortably on this thing with everyone else on the plane staring at you like you are some kind of no-limbed circus freak, well then, brother, my hat is off to you! That is unless I am in the seat next to you, in which case I am looking for ways to secretly deflate your heinous sleep wedge so I can watch you slowly deflate into the neck crimp of all neck crimps. I might even see if I can turn your air vent on high and aim the air jet onto your neck to help lock in the cramped freshness.  In reality, an airplane table can barely hold the plastic cup they give you, let alone this giant sleep wedge monstrosity. Also, this really doesn’t even look remotely comfortable for sleeping. And unless they allow this inside of Mexican prisons, I doubt that it makes “even the most uncomfortable spots downright pleasant.” Now, as the sex wedge that Warren mentioned, there I CAN see some possibilities...

When I first saw this, I took exception to the term “unsightly home theater components.” I happen to think that home theater components are quite slightly. As I like to tell Dana, "TV pays our bills," so I’ll not have TV disparaged in our home. No sir! Not on my watch! However at my Russound event yesterday, fellow journalist, Darryl Wilkinson, mentioned this ad to me and asked if I noticed the video projector (circled for your viewing enjoyment) that magically disappeared from the before to after picture. I had not! Apparently this magical IR system not only helps with your remote control signals, but it can also beam high def video from one side of the room to the other, or somehow break the laws of nature and physics and allow light to bend through a solid cabinet door and find its way to your video screen. Sky Mall! You magnificent bastards! You’ve done it again! 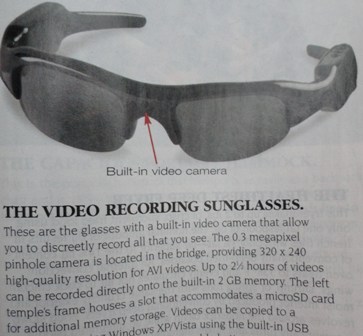 “Why are you wearing sunglasses indoors?”

“I said, ‘why are you wearing sunglasses indoors?’”

“Are you talking to me?”

“Yes, I’m talking to you. You’re wearing sunglasses. Indoors. Why?”

“Are you staring at my breasts?”

“Oh my God! Those are video glasses, aren’t they! Are you recording this?"

"You are! You're recording this! You're a total perv!”

“Is that...? It is! That’s a USB port on the side of your glasses. You are totally recording this! What is wrong with you?! Answer me! What….is….wrong….with….you?!”

“Uh….these are just 3D glasses I stole from Avatar.” 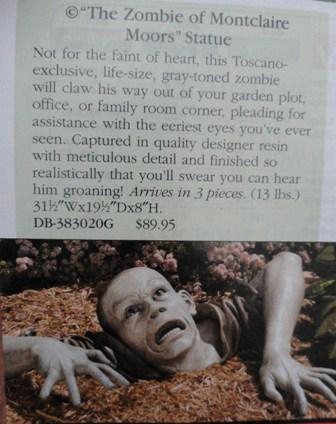 Nothing comforts me at night like having a struggling member of the undead trying to crawl out of the floor in the corner of my family room! I'm afraid that his "pleading for assitance" and hearing "him groaning" would only be disturbing when we were trying to watch a movie. Seriously. That is the ONLY reason why I have not already ordered this.  Maybe I could just put him in Lauryn's room...