The Big White Elephant of Inspiration

For the second straight day, I’m assuming the role of babysitter. I’ve got a 9 year old, picked up early from school for supposed sickness, Kinsley, upstairs watching some Amanda Bynes movie on VHS and eating through a package of Saltines and a 4-year old, Lauryn, sitting next to me on the couch watching Open Season on DVD on my in-laws newly calibrated home theater system from my distant past.

Now, you might think that sitting here with the ones I love – laptop, Internet, iPod, cell phone – that there is just no way that I could be bored. But after like 3 straight days of this, well, I am. I’ve reached max-gross load on John self amusement. Sure, I could be watching one of Miah’s 35 Clint Eastwood films. And sure, that would totally entertain me. I could start at Dirty Harry and work my way through the whole Harry Callahan saga and end up with a Firefox chaser. But there are only so many people getting half-dollar sized holes blasted in them by a .44 Magnum that you want your 4 year old to watch. And, for the record, that number is zero. So, we are watching Open Season. For the third time thus far this trip. (Which, I must say, is actually better than the two times we ended up watching Air Bud while down at my parents. )

So, I’ve just been sitting here wandering aimless around the Great Wide Web and I saw a comment posted on an article I wrote about Best Buy’s lack of 3D sales woes that was picked up by CEDIA’s weekly Crosspoint e-mail blast. You can see the full length, original comment here.

The commenter, maven_marty, makes some really brilliant and salient points. He starts off with this compelling bit of journalistic insight, “John, your writing is fantastic and your stats are impeccable.” Since I heartily agree with him on both points, I was immediately a big fan of the maven’s thought process.

The crux of his comment was this: “There seems to be a white elephant in the room that not one analyst has ever made mention of to my recollection. The fact that every TV viewer across the country just bought a TV in 2008 or 2009 because of the death of analog television. Granted, I know that the FCC didn't require this but that was the impression that [was] conveyed by retailers and manufacturers across America. I have yet to realize my return on the investment I just made not 2 years ago. Screw that new TV that's 3D capable because I just paid a couple of grand on a 1080p set. Isn't that good enough? I used to have the console TV my grandparents had when they died. Now I'm being told that the shelf life of today's TV's is 2 years?" 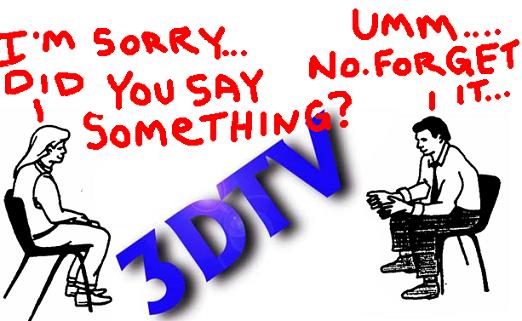 I hate to disagree with someone who is obviously as brilliant and such a great judge of writing talent as maven, but I will respectfully – and gently – offer some counter-point here. This, in a nutshell, is the way the technology ball bounces. Like a hot grounder that looks like it is rolling all smooth on the infield green but that decides to go all off-the-reservation and fly up and chin pop you right at the end. Technology changes. Constantly. You just have to suck it up, and understand that the second you buy something, it is already becoming obsolete. (Now, I actually hate the use of the word obsolete as it implies “no longer in use or no longer useful.” The technology that you bought is still usable. It just isn’t up to the current state-of-the-art, but it will continue offering the same performance that inspired you to buy it in the first place.) If you always waited to buy the latest-greatest, newest-bestest, you’d never pull the trigger on buying anything...ever! (Well, maybe Doritos. They pretty much killed it with Cool Ranch and have just been chasing the dragon ever since.) This year it’s 3D. Next year it will be glasses-less 3D. Then there will be smell-o-vision. Then full on, R2D2 vs Chewie holograms. Will any of them look as good as my two-year-old Pioneer Elite deep, black and penetrating Kuro Plasma? Doubtful. Will my Kuro be able to do any of those tricks? No. Thank God, no.

The maven continues his anti-3D tirade by asking, “Have you tried to buy a 3D DVD? [I’m pretty sure this was rhetorical, but I don’t dodge from the tough questions. So the answer is, no. No, maven, I haven’t.] I went to Wal-Mart and Target only to find 2 tiles (the same 2 titles) available to buy. I'm guessing their selection must suck so I'll go to Best Buy and see what they have. 10 titles, that's it 10! So, my family and I have been going to 3D movies for a couple of years now and apparently there have 10 movies worthy of 3D release? Oh, I get it....They are trying to turn every movie into the Beatles White Album. Forcing me to buy every format of the same movie by delaying the release of 3D. When it's finally available for purchase in 3D format, the $35.00 package has every format included in that package. WTF?”

WTF indeed! I’m not sure that I totally get the White Album allusion, but I like the Beatles and so I’ll agree with this. Manufacturers, if you want to start selling some 3D sets, you need to get the content squared-away and toot sweet! We need Tron 3D, Avatar 3D, Toy Story 3D, heck, 3D-ify the entire Pixar library, and maybe even a Titanic 3D re-release. Look, I don’t know, but *something*! From my 3D blog post, I did some perusing of some of the 3D titles currently available at Amazon.com. Here’s of list of the garbage, I mean GEMS that Hollywood has seen fit to offer so far: Saw3D...Legend of the Guardians – Owls of Ga’hoole...Step Up 3D...Piranha 3D...Cats & Dogs: The Revenge of Kittle Galore...and Kenny Chesney: Summer in 3D. That last one is light the studios just threw up their arms and said, "Look, we're just callin' this one in folks. Kenny put this rider into his contract that none of our attorneys caught until it was just too late and now they're telling us that there is just no graceful way out of this mess except to just release the damn thing." Seriously, if you said, “John, you MUST pick at least one title from this list by the time I count three or I’m going to punch you square in the balls! 1...2...” I promise, I would struggle. I would hem-and-haw and actually be sitting there calculating and speculating about how hard I thought you could punch and what my doesn’t-matter-had-sex chances were for the next couple of days.

“If 3D is going to make it, content HAS to be readily available for purchase. The delayed format release of movies like Avatar is complete crap! I will not make 2 separate purchases of the same movie only to end up with duplicates of the same movie and same format.”

You want to bitch about buying Avatar twice? Oh, maven, you make me laugh! Bwa. Ha. HA!!! In fact, I might just run out and pick up two copies right now to show you how funny I think that really is! Serioulsy. Like leave these two kids at home to mind their own while I find a video store in Alabama that sells two versions of Avatar. I think the studios are finally pulling a page – a very profitable, money-money-money, big piles of money page – from the o’le re-release master himself. That is, of course, none other than George “I've gone over to the Dark Side...now with new added footage!” Lucas. I’ve purchased Star Wars on VHS, on Widescreen VHS, on Laser Disc, and on DVD. I only count myself lucky that I somehow avoided purchasing the Beta and original non-SE Laser Discs and the re-re-release of the Original Trilogy on DVD that George left alone for “purists.” However, my luckiness is already overshadowed and Lennie-I just-want-to-pet-them-rabbits-George by the $99 that I know I’ll be spending when I purchase them on Blu-ray when they are released later this year. “Star Wars: Buy it again. For the first time.”

Honestly though, the part that I think is most absurb -- and where Hollywood is killing the golden goose for the quick egg sale -- is the concept of making titles exclusive to those people that purchase a given model of 3D set. Sure, in the short term, you might sell a couple more Brand P TVs, but what it really does is just keeps decent titles off the market even longer, keeping adopters like myself and maven from pulling the upgrade trigger. (PS: I'm totally not considering pulling that trigger. If any of you people find out that I ended up going out and buying a 3D TV, I want you to smash me with the Flame War hammer as you've never smashed before!) From my understanding – as Neanderthal as it is – when Avatar 3D does come out, it will initially only be available to purchasers of Panasonic TVs. And by initially, I mean until February of 2012.  Which is just, well, SWELL! So, not only are they limiting the 3D content, but they are actually encouraging you to NOT buy a 3D TV until the 3D Avatar bundle comes out! I mean, I’m not really a giant Avatar freak fan, but if my choices were between watching Avatar in 3D or Kenney Chesney, well, I let’s just say there wouldn’t be any country music in my selection. Actually between nothing and Kenny Chesney, I'm asking if I can buy a couple of TVs to get two copies of nothing. And if I had already purchased a Panasonic TV and now was ass-out-of-luck on getting Avatar, I’d be pretty pissed.

“Lack of respect for the money consumers are willing to spend on the same will be the thing that kills 3D. Convincing consumers that HD was what they needed to watch digital TV was dirty but to tell them a few years later that EVERYTHING is now 3D is a slap in the face. Doing the same thing with content is like posting the slap on YouTube for all to see.”

I love this final quote. It is like a wonderful, flourless chocolate torte topped with a fresh heavy creme, a raspberry and mint sprig at the end of a great meal. And if there’s anything that I’ve learned while at my in-laws this week, it is that people love watching people getting face slapped on the YouTubes.

Reply JCRisn
11:23 AM on January 14, 2011
Talking about how to shaft the consumers, Samsung sold 3D-Ready DLP TVs in 2007, 2008 and maybe 2009 with the advertising of, "3D HD ready?Future-proof your HD experience". The 2010 Samsung 3D Blu-ray players did not include the 3D output pattern required by these DLP TVs (checkerboard pattern). HOWEVER, Panasonic 3D players did, and that is what I bought, a DBP-BDT350! Many, many Samsung 3D DLP owners spent their money on the purchase of these Panasonic players... money that Samsung apparently decided they "didn't want". These 3D DLP TVs can also by connected to a computer to view other 3D content such as games and 3D movie files and I think Google 3D Earth. Samsung has dropped the ball on these TVs but I am glad I purchased the HD TV with the 3D-Ready feature because now I don't have to buy a new TV!