Are you a Linksys or a Link-sissie?

A couple of posts back, I told you about my home network dilemmas. And, since I never gave two-hoots OR a holler about the type/style/brand/features of my previous router, I’m guessing that goes extra-extra for most of you. (Show of hands...who even knows A) what kind of router they have and B) where it is located? Yeah. That’s what I thought.) A router is one of those bland, faceless components that you never think about. Kind of like an old bucket of paint up in the attic, a coffee filter or Angela from The Office. But when it was time to get a new one, I actually put a little – I mean a *real* little – bit of thought into the selection process. So, when I looked at the boxes I essentially saw these three choices: 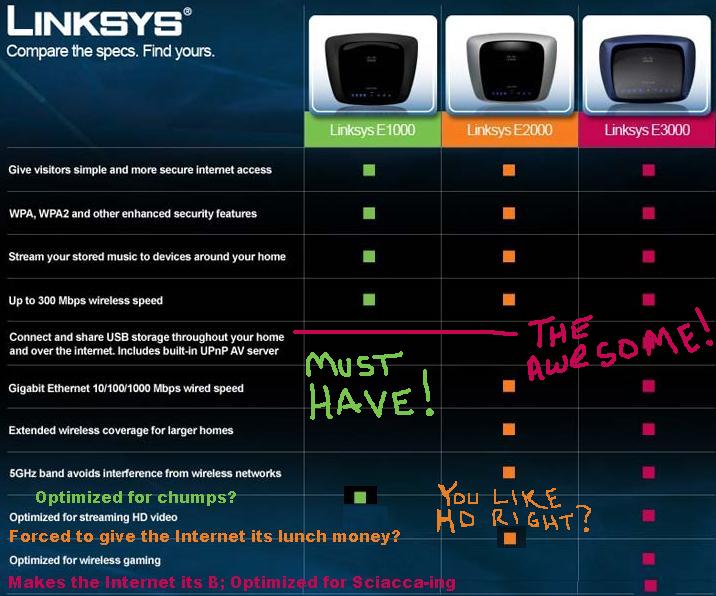 I know, it might as well be screaming, "Good, Better, Best. You want the Best, right? Aren't you worth it?"

Now I know some IT nazis prescribe to the notion that there are essentially two simple ways to tell if you have a good router. One: Is it designed to mount into a rack? Did it come with rack ears or a rackmount faceplate? Two: Does it say Cisco or Enterprise-Grade or cost more than $1000? If you can't answer yes to either -- or preferably both -- of those questions then you might as well just go back to reading a book. But since I didn't want to either rack-mount OR spend $1000 on a router (mine was about $150) I needed to fulfill my own set of criteria, or what I like to call "things I want."

Thing 1: I knew that I wanted it to be Gigabit. This refers to how much data it can cram down each of its cram holes – aka ports – at one time. Most routers are Megabit, and while Megamind might have a big, giant evil blue head, and sound like a lot, it’s really Gigabit’s younger, uglier, slower and dumber sister. Megabit sends up to 100 Megabits per second; Gigabit sends up to 1000 Megabits per second. One thousand, million, billion! That’s 10 times as many bits. Who knows what you'll do with all those extra bits. You can just throw some of them away and download them again with all that speed. And at what point in your life would you not want 10 times more of the Internet? That’s what I thought. So the next time I hear any of your saying, “Whaaa! My Internets are so slow! I'm sick of this buffering!” I’m just gonna look at you and raise one eyebrow. And that eyebrow is going to say “Gigabit?” And then you’re going to hang your head, unable to face the shame raise of my eyebrow. Plus with more and more videos moving to the nets – Netflix anyone? – and more devices being added within a home – desktop, laptop, Blu-ray, gaming systems, iPad2, anyone? -- you are only going to be trying to ram more data through that single chokepoint. And if living with the Kaleidescape Blu-ray server has told me anything other than how awesome it is to indeed be living with the Kaleidescape Blu-ray server it’s that you need the Gigabits to move true HD video around your home. Otherwise you get video freezing and blocking and all that garbage that makes me not want to watch stuff at other people’s houses. So, Gigabit. That’s where it’s at. Gigabit, the choice of a new generation. Gigabit, the fresh maker. Gigabit, the uncola. Gigabit, the man men want to be and women want to be with.

Thing 2: I knew I wanted it with the better wireless and the more gee bees. I don’t know what the deal was with 802.11n, but it was in draft –non-finalized -- mode for like ever. I had been waiting to jump on the n train because I didn’t want to get left behind when they decided to finalize the spec and change that 34th character in the authorization string so mine no longer worked. But now .11n seems to be here and it is stronger, faster, more powerful than .11g and it just walks up to .11b and gives it a wedgie, knocks its books to the ground and then steals his girlfriend and makes her the prom queen. With .11n I was hoping that I could not only surf faster but also eliminate the wireless access point that has been sitting on our kitchen counter for like the past two years. (I know; Dana would have you believe that I don’t care what our house looks like, but I would *hate* for any of you to ever drop buy and then just see that WAP sitting there like some Geek Squad has set up my Network. Technology shamings are one of my great fears.) Also, my new iPad2 is all about the .11n, so I wanted to make its new Internet home as shiny and cozy as possible. And some totally unscientific speedtest downloads are confirming that I am definitely Internetting faster. (High-fives self!) 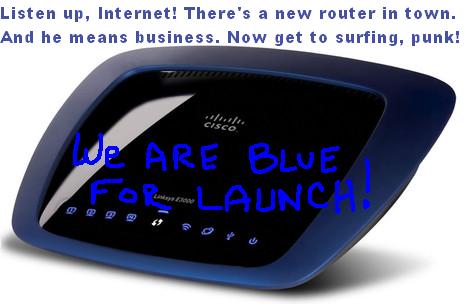 Thing 3: It needed to be easy to set up. As I mentioned previously, I’m a graduate of the John Sciacca school of Networking, and that was a brief, BRIEF class with a very high dropout rate and a very basic curriculum. So, I wanted easy. I also need to be able to get into the router from time to time to change things and whatnot. The Linksys came with a disc that makes the setup uber simple. Also cool is that it sets up an automatic Guest profile so I can hand you a simple code when you come over – OK, its kiwi86. I don't know why it's kiwi86, but it is – and you can use my Internets but not access my computers or files. Ha! Take THAT guests! Thought you were so welcome on my network! ("Hey, John. Where's all of your music files?" "Oh, there over here in the not-Guest zone." "Can I access them?" "No. You stay in the Guest DMZ. One more unauthorized entry attempt will result in speed throttling!")

Thing 4: Ability to attach network storage. I didn’t even really know that I wanted this, but since this model offered it and the others didn’t, I knew it must be awesome and the greatest thing ever added to a router. Basically it has a USB port where I can connect my Terabyte hard drive. On my Terabyte drive is like 10,000 songs and lots of pictures. Normally this was connected to our desktop computer, and when that computer was on, the files were available on the network. But lately that computer has NOT been on. It is suffering some kind of Stage 4 computer dementia. It seriously needs to be put into hospice or whatever you do with a lame computer that you just don't have the heart to rage-smash with a sledgehammer. It will turn on some days and kind of run like its old self. You’ll log on and the fog will clear from its hard drive and it will remember you and tell you about some great times you had 5 years ago. But more and more it just likes to suddenly and randomly reboot. Then after a few times of that, the screen just goes black and the fan starts spinning at 110%. Like it has forgotten that it is a computer and now things that it’s a Dyson or something. This is especially jarring if you are, say, a writer and you have been, say, writering and the computer just *click!* turns off right in the middle of a non-saved bit of work. Using it is really a bit like playing technology Russian roulette. It might go through a half-dozen power on/off cycles before it will be on long enough for you to get through the whole Windows boot-up process. Then it might be on for…a minute…ten…thirty. Who knows? That’s really all a part of the excitement of working on it! (I’ve tried some troubleshooting including disabling all startup items but that doesn’t help. It WILL run in Safe Mode, which makes me think that something – processor? – is being overdriven and just can’t handle the stress of Dana’s modern day couponing.) So with this new router, I just connected my hard drive, set up a couple of network share folders and voila! All of my music and pictures are always right there ready for my streaming pleasure! Oh, and the pleasure is all mine, I can assure you!

Thing 5: I haven’t even used this feature yet, but apparently this thing can set up an FTP (File Transfer Protocol) site where I could remotely access my biggity-big files. Say I’m over at your house and I decide that I’m totally missing my collection of depressing music. Now I can just log in and grab something especially dreary and then we can both feel sad! Doesn’t that sound great!

OK. In exchange for you reading this far, I'll do my level best to not talk about computers for a few days at least. Now, let me tell you about my new Lutron HVAC control system...