Selling, Embracing and Living the iLife

Few technologies have engendered the “I create feelings in others that they themselves don't understand” near-autonomic, primordial level response of iStuff. And while there have always been Mac owners even before there were actually even Macs – oh, Apple IIe, you and your green screen and awesome Choplifter and Castle Wolfenstein games! -- it wasn’t until the iPod came along that a wider swatch of society started feeling like they were maybe cool enough to break the bonds of PC-servitude and embrace the secret, black turtleneck wearing Jobs that lives within us all.

Then when the iPhone and iTouch came along it was as if someone – ok, that someone was His Steveness – strapped a rocket onto technology and popular culture. All of a sudden the word “touchscreen” was a part of the zeitgeist. (I’ve always wanted to work that word into a story. I’m glad you were able to be here to witness me finally pulling it off! It’s really a special day for us all!) I know this because I can say "touchscreen" to my mom and she won't stare at my like I started speaking in click-clack. Suddenly people started eschewing buttons, understanding the concept of dynamic screen real estate and the power of using pinch and swipe. It was a happy day for technology.

And then, like all great things – gas station sodas, value meals, the budget deficit – the obvious solution was, “If small is good, then big will be...awesomer!” Just imagine if we took the everything that people loved about iPhone/Touch and we simply made it...bigger! ("We'll remove the camera on the first model, of course, but they'll hardly notice. And it will give those holdouts something to get excited about for the gen 2 model." "And what about some kind of built-in media connection like a USB or SD card slot?" "Gen 3.") Tablet sized. Like a, I don't know, pad or something. Like an...iPad! By Jobs it's perfect! It was the “one more thing…” that we’d all been craving.

And now owners carry this tablet around like it’s a holy relic. They buy nice little cases for them. (I know, because I just did. A $50 piece of molded plastic that *feels* like it should have cost about $2.79. Just goes to show what a precision opening cut in the same location as a pinhole camera is worth to people. But I know that if my new shiny back case got a scratch, I’d just die! Die I tells ya! Thus, the $50 piece of molded plastic I bought.) They talk about how many pages of apps they’ve downloaded. And they are always, always looking for new uses for their favorite portable.

Sitting in front of my custom install showroom is a large sign with a reader board on it. We make an effort to change this occasionally with fresh, snappy little text-message sized bites of information designed to entice people to come in and take a look around. Messages like “Accept 3D before it destroys us all!” or “Remote controls want to rule the earth! Let us eliminate yours before it’s too late!” or “I’m starving. Please bring me some Chick-Fil-A.” Things like that. But on our sign right now is the message that has probably attracted more attention than ANY other in the history of CTA's sign ownership. 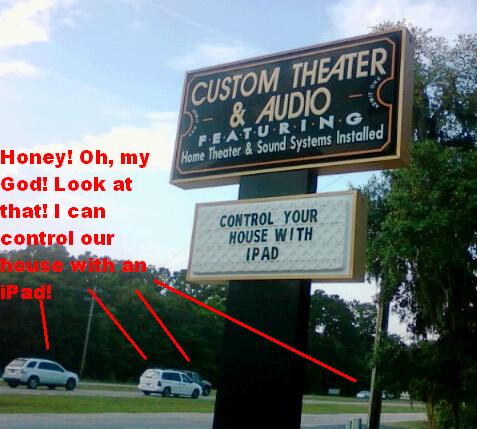 “Control your house with an iPad.”

Simple. Powerful. Effective. Like a tractor beam this thing is. You would not believe how many people have stopped in all giddy asking about this.

“I was driving by and I saw your sign. I had to turn around and come back. Seriously. I think I ran a family in a minivan into a ditch. Doesn’t matter. You see, I have an iPad and I would love to be able to use it to control my house. In fact, I’d love it to control everything in my life. My wife, my kid’s, my boss, my neighbors... Doesn’t matter. If I can start with my house, well, this might be the single greatest day in my life.”

(Kind of a veer-off here for a moment. The iPad is one of those things that people feel like they have to work in ownership at some point during a conversation. “Gee, Bill, I’m awfully sorry to hear about that 6 hour colonoscopy, but, well, I just thought I’d mention I own an iPad.” “I have some bad news and some good news. The bad news...well, your financing has been declined and I’m afraid you won’t be getting that loan you need. The good news...I just received the tracking information and my iPad should be arriving any minute now.” “Hey! Did I tell you! We just found out our son was accepted to Princeton!” “No, but I’ve got some real news! I have an iPad!” Seriously, never underestimate the level of pride that this sentence carries amongst people. I bet if they started the next Israeli-Palestinian peace talks by handing both leaders an iPad at the opening and saying, “There. Now you have that in common. So...just where do we go from here...?” you would see that wall down in no time.)

This has been so successful because iPad owners are borderline freakishly in love with this tablet not-a-computer and are *constantly* on the lookout for new ways to use it. And the recent launch and hype around the iPad2 has only served in hatching a new legion of i-Zealots. It has even been made more special and clubby and in-with-the-in-crowds because of the still near impossibility of actually being able to get hold of one of the stupid – OK, I mean stupid AWESOME! – things. I know that Jobs and Apple and all those so-happy-happy AAPL share owners would love them to be churning out iPad2s like clones on Kamino, but the scarce availability has definitely created a “I know where the secret rave party is tonight!” vibe around those people who’ve managed to snatch one up. (Jumps up and down shouting "Me! Me!" and throws glitter in the air!)

So when those folks come into our store and ask how it’s possible to control their house with an iPad – “It’s an app, right? I know it’s going to be an app. There’s an app for everything. Have you gone to the app store? Do you download apps? They’re amazing, right? I mean, you DO have an iPad, right. I have an iPad. Did I say that already? Oh, I did. Yeah. Well, I have an iPad and I just looooooove it!” – we show them our iPad running the Control4 MyHome app. It looks like this: 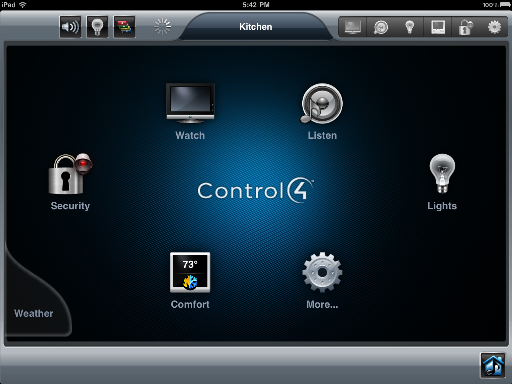 And when you demonstrate that the iPad can actually control their home, they go all starry eyed. It does the lights, it does the thermostat, it does the audios and the videos, it does the security, it locks and unlocks doors, it can turn the sprinklers on. Want to set up a remote web cam where you can watch someone as you administer random electric shocks from hundreds of miles away? Fine. And I want to help you implement that vision. Because if it can be triggered or tripped or relayed or IR’d or serial’d or IP’d or whatever, you can iPad it.

But then some skeptics will say something like, “Control my house with an iPad? Why would I want to turn my lights on and off from Nebraska? That’s just stupid!” (To which I'm thinking, "Seriously? You saw our sign, and then took the time to pull in here JUST so you could belittle the very thing that had you pulling in here in the first place? Are you really that lame? Really? Yes? Well. OK. I'm going to go into the back room and continue to slowly kill myself with Dell CRT monitor radiation leakage...")

And, yes, I’ll agree that there is an element of stupid to the idea of turning your lights on and off from Nebraska, assuming, of course, that you are not IN your home IN Nebraska. (They do have electricity there, right? They don’t just say, “OK kids, the great big light in the sky is going off again. Y’all climb inta bed and rest up for your corn chores tomarra!” right? My Nebraska knowledge is hazy.)  And the idea that you would log into your home to manually turn some lights on and off is probably pretty remote. Seriously, I can’t get the members of my family to reliably turn the lights off when they’re IN the house, let alone expect them to do it from hundreds/thousands of miles away!

But the great thing about automation is that it can be AUTO(the first part of that word "automation")matic. You don’t have to think about it. Let the programming do it for you. Say setting up programming in your automation controller that automatically turns lights on and off for you, say at sunset and sunrise, to make your home look lived in. Or changing the thermostat temps throughout the day. Or automatically administering electro-shocks on the half hour.  Instead of all that manually doing mundane chore, you can be using your iPad for something else, like playing Angry Birds or watching the latest installment of “Will it blend?” (And even though I already know going in that it IS going to blend, I still find myself powerless to stop watching.)

And while I’m still not totally sure that loving the iPad isn’t going to put me out of business, I can say that now that I actually own one, at least I’ll be standing in the food lines holding my iPad2…and grinning with the rest of those out of work installers. Maybe I can trade my powdered cheese for credits at the app store...