First off, I believe in giving credit where credit is due, so I’m going to start by giving big props -- and two respectful golf claps -- to CE Pro/Electronic House editor/journalist/blogger/superhuman writing cyborg, Julie Jacobson, for being the one to run, break, follow, just about any story that seems to happen in the Consumer Electronics space. Julie has a preternatural ability to get stories written and posted before other people even knew they were stories. (And yet, she’s still not in the A/V Boy’s club! Inside jokey...) If you’ve ever met Julie you’ll know that she is running a multi-multi-core, hyper-thread processor in her head that is constantly working on like 9 things at once and if there is ever a way to directly tap the writing portion of your cerebellum straight into the Net where thoughts can just bypass the drudgery and time-suck of a keyboard, I’ve no doubt that July will be the one first writing about and then spearheading the program.

So, Julie put up a story yesterday about a major electronics manufacturer – Crestron – suing one of their dealers. (You can read her article here, as well as the oft-heated comments at the bottom. And, if seeing the 25+ comments on that post should in some way inspire any of you to commenting greatness here, well, then I’ll thank Julie for that as well.)

The crux of the suit is that this dealer – Cyber Sound – was at one time a major Crestron installation partner. Major in like they were doing around $1.1 million per year in Crestron business alone. But apparently now they have dropped Crestron for another automation manufacturer – Savant – and in the past 6 months their Crestron numbers have dwindled to something like $20,000. Crestron no likey the 98% decrease in business. In fact, they like the pretzel moneys and they want to keep the pretzel moneys and now they are suing to get their hands back on the pretzel moneys. 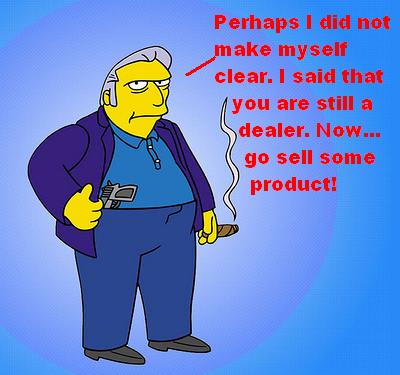 Now, what I’m not going to go into here is the other backstory to this issue; the part where Savant filed a sure-seems-like-grandstanding lawsuit against Crestron on the eve of CEDIA, the custom installation industry’s largest annual event. A move that stole lots of headlines and got Savant lots of media and installer attention. Also not going to go into how Crestron has now filed a counter-suit against Savant which they claim is a “publicity stunt.” This little back-and-forth pissing contest definitely appears to be heading for a David (Savant) vs. Goliath (Crestron) courtroom showdown, and I say let the two of them duke it out there if that's what they want.

What I am interested in is the possibly totally sketchy, scary-slippery slope leading straight into the mouth of a giant machine filled with chomping teeth and gears that the precedent of this suit could set for our industry. Basically, if a manufacturer is unhappy with a dealer’s performance, instead of trying to motivate and incentivize them to do better or to take away advantageous pricing and net terms or to ultimately just cut them off and look for another dealer to represent them, that they’ll take to the courts to try and set matters straight.

The crux of Crestron’s suit – which uses the awesome phrase, “reflects calculated and coordinated skullduggery." And, seriously, if for nothing else, thank you, Crestron, for providing me the opportunity to use the word "skullduggery" in the 21st Century! All this time I thought that foregoing a career in law was going to preclude me from such a titillation! – alleges that Cyber Sound breached their signed dealer agreement which claims that the dealer will “exercise its best efforts to promote the use and sale of CRESTRON products.” (Again, I’m going to take the journalistically lazy way out and just share the link that Julie provided which takes you to a legal site for a bit of lawyer-ize to explain the potentially slippery slope of “best efforts” clauses. Once again, thanks, Julie!)

I have signed my share of dealer agreements with manufacturers, and, I’m going to be honest;  I TOTALLY don’t ever read through every word and line of them. And if you say you do then you are either a kiss-up, liar or you are one of those bored, frustrated accounting types that derives the kind of pent-up frustrated pleasures from life like searching for typos in books. Rest assured that your decision to end up in this exciting industry will forever remain a mystery to your co-workers.

I imagine that you read through these docs much like I do; giving them the old slap-and-tickle of a glance while you search for the X that you are supposed to sign next to. These things are usually multiple pages long, with addendum this and pro-rata that with some initial here and sign there and just send me the product already so we can start making some money, baby! And there could definitely be an article IV, subsection A, paragraph ii buried in there that says if we fail to meet such-and-such a sales goal that I will then agree to donate an organ of the company’s choosing to further nanotech research. And then they’ll sue me.

I don’t read them because, well, they’re pretty long and boring and I’m not all that lawyered-up with all the fine print and at the end of the day I’m assuming that most manufacturers actually want to be on the same team with you and have you work together to create a successful business climate.  And pretty much most of them all say, “Hey! Don’t be an idiot! We don’t want you selling our product on the Internet, ripping off customers, mis-representing our brand, or lying about the warranty. If you install it wrong and it catches on fire and burns the house down, don’t come crying to us about it! Agreement over!”

Generally a company looks to create a two-way business relationship where they help you to succeed and not threaten you into performing. I haven't needed the old, "Do this or you're going to get a spanking!" motivational technique for like, gee, 10 years now. And even then, it might have got me to do what you wanted -- Are the gutters clean enough for you, dad?! -- but there was little joy or comraderie in it.

I’ve also been on the receiving end of a manufacturer deciding they no longer wanted to do business with me; I blogged pretty extensively about it. (This is probably the best one.) Now, as lame as that was – oh, and don’t get me started! It WAS lame! And a bit like watching a car wreck if you ask some people – it was a hell of a lot LESS lame than them dropping me AND filing a lawsuit. “We see that your numbers and down and that you’ve been selling brand DT speakers. As you can see from this agreement you signed, you promised to do your best to sell our speakers and, well, we don’t feel your best is good enough. So, looks like we’re gonna have to sue you. Bummer.”

As with everything, there are two sides to everythign and I’m sure this is not merely as cut-and-dry as Cyber Sound just switching over to another company. And I can tell you, we’re a Crestron dealer and there have been many years where we’ve purchased little more than replacement batteries for a touchpanel remote. (Seriously, that ST-BP seems to die like clockwork!) And never once did we get a threateney call or e-mail or anything more “intimidating” than our rep stopping by to ask, “Hey...your business is pretty slack. What can we do to increase our business with you guys?” Granted, the “sting” of losing a sub-$1000/year dealer is QUITE a bit different than one doing $1.1MM. And when you start talking a million-plus a year, you are talking about real money; walking around money. And as you know, messing with my money is like messing with my emotions, and there are going to be A LOT of emotions involved here.

On top of just jumping onto the SS Savant, Crestron is alleging some unethical sounding business practices on the part of Cyber Sound; things like using the Crestron brand to secure meetings with clients and then bashing Crestron in order to flip the potential customer over to Savant. That certainly isn’t cool and sounds like it could potentially open the door for a libel (if there were any e-mails or letters to clients) or slander case.

Now, I can tell you; I’ve had a lawsuit threatened against me and it’s muy not cool. Of course, that was from a guy that is recovering from a massive brain tumor who is prone to violent bouts of rage who I've been trying to part ways with for years and not, you know, a totally respected giant, multi-million dollar international, industry leading automation manufacturer. With likely an entire legal team at their disposal. And even then, the potential threat of legal action is enough to give you a day filled with watery diarrhea and giant swells of churning stomach acid.

Either way, this is the kind of thing that can swallow a small company whole and I’m sure that it sucks for the Cyber Sound guys, and hopefully they’ll have their legal house in order. However it plays out, this is going to turn into an interesting fight with potential ramifications for many manufacturer-dealer relationships going forward. And will have me spending a wee-bit more time reading the fine print before I sign my next dealer agreement, thank you very much!

Reply Julie Jacobson
6:10 PM on June 22, 2011
And yet they still won't let me into the boys' club. Harumph! (but thanks for your own special brand of graciousness)

Reply Julie Jacobson
6:13 PM on June 22, 2011
Also, I'll have an article next week from an attorney who hopes to shed some light on dealer agreements and this particular case.

Reply TMK23
4:37 PM on June 23, 2011
Crestron didn't sue Cyber Sound for lack of sales, nor did they cut them off for lack of sales. Crestron doesn't even have minimum sales requirements like a lot of mfg's do. They DO, however, want you to sell more of their product and will certainly help you do so. Hmm..seems reasonable to me. And if people choose not to read a dealer agreement, they're basically choosing 'ignorance of the law' as a defense should things go south with that mfg. Doesn't work for me but hey, to each his own.